Successful People Aren't Always Going up, Up, UP.

I don't consider myself too successful. Really, I'm just an average guy (who is pretty lazy, lol), who is just doing his normal thing.

I recently wrote about how I was ranking well, and how I've been having success in traffic (feel free to check them out on my WA blog).

Unfortunately, I've actually been ranking so well, that my traffic has gone down!

I know, it sounds strange, but it really is happening. I'm ranking so well, that I'm actually losing traffic because of it.

Here's how it happened.

My team and I (basically a bunch of my family members) had this brilliant idea. I write a bunch of articles, then we get them to YouTube, and other social media outlets, and get double the traffic, right?

Well, that's not exactly how it works, but let's just pretend that's what is supposed to happen. We've been making YouTube videos for a while now, and have had a few that took off (meaning that they got more than 30 views).

Now, I was getting a lot of traffic to my site from several articles. And we decided to take those articles, and make them into YouTube videos. And when we did, they ranked as they typically do - in the first few positions of Google Search Results.

They ranked so well that, um, well, they ranked higher than our article on our site. Yes, that is a good thing, but it's not a good thing when everyone goes and watches the YouTube video and doesn't get to our site.

I can go into more detail later on the pros and cons of all this (because there are both depending on how you look at it). But the main point I want to bring across is that just because someone has 'success', doesn't mean that it is always straight up from there.

Successful People Have Bad Days Too

I think it's something that isn't talked about a lot - the bad days of successful people. I know, no one wants to hear about something negative in this generation, but just because no one talks about it, doesn't mean that it isn't there. 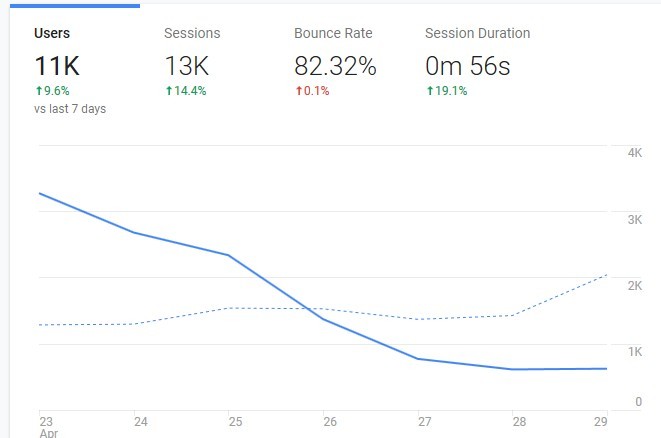 In the above screenshot, you can notice that my traffic has seemed to go down, quite extensively. I had just made it to 3K users a day, and then, well, YouTube and other things made it go down.

Right now, I'm in a 'low point' with my site. I'm not really worried that it's going down (though my application for MediaVine might be slighly affected). But it's just one of those things that are happening on my site right now.

I'm not here pouting and complaining about how horrible I have it, and how it's not fair, blah blah blah... (I'm actually very thankful that I've been blessed with so much traffic).

What I am here saying is that you don't need to worry about those bad days with your site - everyone has them, even 'successful' people.

What I Do When Bad Days Come

I don't think the right answer is to say that we should think ahead, and tell ourselves better days are coming. Because, for all I know, I could have worse traffic, and never see it come up to 1K per day ever again.

And I guess this is all a matter of opinion, but what I personally think about is where I have come from - looking all the way back and see just how much I have progressed.

Yes, I have lost about 2K of traffic per day. But let's look at where I come from, and where I am right now.

I was able to build a site that got 3K of traffic a day (for a while), and the traffic I'm currently getting is a lot more than most other normal people.

Also, while I may not exactly like it, I can also think of just how far I've come with YouTube. I've been able to get YouTube videos to rank fairly well in Google, and get traffic to them (and increase our subscribers on our channel).

So, instead of looking into the future, I looked at the past, and see where I come from. After that, I continue working on my site.

Continue On Even In The Bad Days

After I finish thinking about the past, I get right back to work - I'm definitely not going to change my situation if I don't continue to build my site out.

So anyways, just wanted to let everyone know what I was thinking recently. If you also are in one of those 'bad days', feel free to reach out to one of the many community members and ask for help, if you need it.

As always, stay cool, stay strong, and stay away from those scammy people who want to take all your money (trust me, there seems to be a lot of them on the internet)!

Write something…
Recent messages
Brenda63 Premium
Yes, a lot of money scammers are on YouTube. I see a lot that. Most are like cash gifting schemes. Thanks for sharing your traffic experiences with us.

Reply Like Like You like this
Swangirl Premium
I agree! As an Ambassador I now rarely post anything negative since there is extra scrutiny. We are supposed to be the cheerleaders of WA. In reality I think people are reassured to see that we all have low points however. We will keep going and overcome them, but they do indeed happen! If we only post about the Ra Ra! This is Perfect! days, it is not 100% honest. I prefer honesty. It is not easy. If you go back and look at my posts from the last 3 years you will see many that describe the roller coaster effect here were traffic goes up and down and sales go up and down and sometimes we have none at all.

My websites are my third job so I just don't have time to advance as quickly as I would like here. However, I make a profit, have two niche sites and have some WA referrals and am moving forward. I am happy with where I am and know I will keep progressing slowly but surely.

You have a great problem with the YouTube videos! Congratulations. I am sure it will all benefit you in the end.

Reply Like Like You like this
Rainfalls Premium
Hey Andy how are you man. First off I applaud you and your family are so blessed. To be able to come together to work on this project. Super smart.

You hit it right on the head. There are certainly ups and downs. One reason is because there is so much competition out there. So keep on pushing and pluggling. You got it!

I think you all are doing Super! One thing I might recommend if you are not already doing this.

I have never done that before but I am going to start. I have been moving too fast and this is my slow down week :) . That is huge I think

Also in the section where you can write under the Youtube video. I put a link to my website so it viewable and clickable . So they won 't have to click Read More to see it.

Usually that is the First Line of Text under the Video. Continued success!

Reply Like Like You like this
AndyCalvin Premium
@Rainfalls
Thanks for that idea. We've toyed with something similar to that - making a shorter video, and telling to come to our site to see all the info. But we have yet to try it.