This is my monthly update of where I am with my website that I started 3 months ago. You can read about my previous update here:

So, without further ado, let's dive into how month three went!

For the past two months or so, I've been actively answering questions on Quora, and that activity has been paying off.

Just yesterday, I received 40 people from Quora alone. I usually average somewhere daily between 30-50 people per day from Quora.

You can check out my stats below. 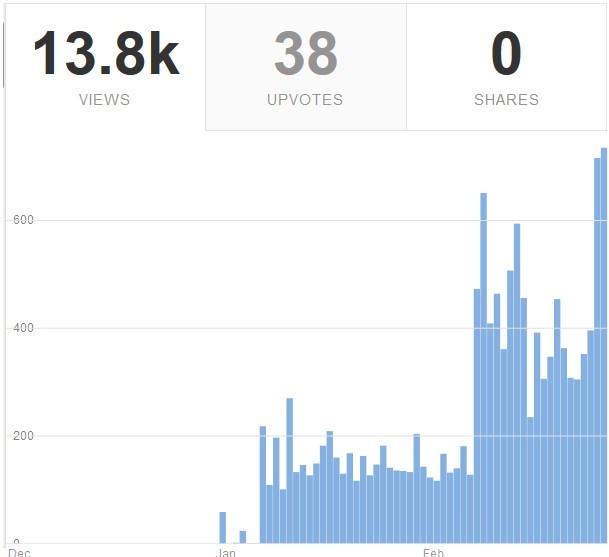 Interestingly enough, 10K of those views came from just last month. And I'm happy to see that I've had two straight days where my views are over 700. Hopefully that will increase, but we'll see.

How did I do all this?

Very simple actually. I just decided to help people by answer questions. To be honest, I first started, and tried to get people to click through the various links that I added to my answers.

After a few Quora moderations, and my posts being deleted, I realized that that's not how you're going to make sales.

So, I switched up tactics.

I answered questions for the sake of answering, and giving as much helpful advice as I could. If I could throw a link in there (or two or three), then I would do so, but I never tried to force them into a post.

Most every time, when I had tried to force a link in, I found that my question was deleted for one reason or another (that doesn't bode well for your Quora account). So I've been sticking to that just being as helpful as I can, and have since seen a great deal of traffic.

I think many new people here don't quite understand the whole helping thing. Affiliate marketing shouldn't revolve around only making money. That is one aspect, I will agree (and it is a big one too).

But helping people and giving sound advice on what-ever your affiliated with is just as much a part of it.

When you help your audience, they will see you as an authority in that certain niche, and will start to promote you as such.

Additionally, they'll more likely to do what you want them to do (i.e. buy a certain product/sign up for a certain program), because they trust what you say.

How I Have Been Helping People Last Month!

My site deals heavily in getting scammed. I've looked at some pretty weird scam websites this last month, and some that are not so weird (who knew that a site with the domain e-vaporizer in it would sell a brand of shoes...).

And one of the things that I do is get scammed for my audience. You see, I have a contact form, and let people send me sites to look at and see if they're scams (what better way to find things to write about!).

Many of them don't have affiliate programs. Many turn out to be scams. But, since I'm in the business of helping people, especially with them not getting scammed, I look at it and give my best critique.

You don't make any money doing it (and my team and I are working on that), but that's not what really matters. What matters is that I gave the best helpful advice to the certain person, and helped them from getting scammed.

So that's personally how I have been helping people last month, and hopefully in the months go come.

What I Have Done And Future Plans For My Site!

Well. Last month was a pretty tough one, and a short one as well. I didn't get half as much as I wanted to get done. But that is how life is.

My YouTube channel is doing pretty good. We have about 10ish videos on it, one of which seems to get about 10-20 views per day (which for us is a really good achievement).

I've only written around 12 or so articles in the past month. But I've been working on several other things, which I will explain below.

One of my team members got our first podcast made - he's working on more, so that he can release a bunch at the first time, to give people something to listen to. And let me tell you, the podcast rocks.

I don't get excited for much stuff, but this guy behind the podcast made it much more than I could have hoped.

He helps people learn about stuff without you realizing you're learning, as well as keeps the whole thing funny and engaging. It's definitely something that I can't wait for.

I'm personally excited right now. I literally just received an email from ScamAdviser - if you don't know who they are, then feel free to look them up. And they hinted that they might be interested in linking to one of my articles in their newsletter!

I'll email them back after I finish this article, but it's getting me ecstatic. Which leads me to my future plans:

Branching out. I'm hoping at some point to get in contact with others who are in the scam world (the good scam world), and seeing if I can guest post on their sites. I'm hoping in the month of March to start making connections, getting my site 'out there', and helping expand my horizon.

Of course, it will take time, but hopefully it will be rewarding.

Email Subscription List. I also hope to make the initial steps for starting an email subscription list. I would like to implement it in this month, but it might not be till April that we get that fully finished.

With email lists comes a little more work and expertise, but I'm sure I can fit it into my busy schedule somewhere.

Patreon and Support System. Because I deal with a lot of people who are interested in having me look into sites to see whether it's a scam or not, my team and I are going to experiment with Patreon, and see if we can get people to support us in exchange for us looking at a site.

It won't be mandatory to support us, but if they found our site helpful, and want to, they can help us, so that we can continue doing this for the future people on the site.

Podcast, Twitter, Blog expansion. As usual, I'm hoping to continue writing articles for my site, as well as get on twitter, and see if I can get just as much success on there as I have on Quora.

Additionally, I've talked with my team member who is doing the podcasting, and he has plans set to get things rolling, so we can release them soon. Or at least that's what I think he doing (he's off at college, so it's not exactly certain what he's doing...)

Well, I think I've used up too many words, and wrote a little too sporadically. Sorry about that.

But anyways, successful times are coming, if I continue to plug away at all this, branch out, and keep helping others.

Hope everyone else is doing great, and wish you have just as much success as I'm having, and more!

Write something…
Recent messages
kpercival55 Premium
Great work Andy!
You’re doing well to plan your work and work your plan...a big key to your success.
All the best to you,

Reply Like Like You like this
AndyCalvin Premium
@Mick18
Hey Mickey! Thanks for dropping by and commenting. You are totally right. Helping your audience and making sure they get the best experience out of your website is one of the key ingredients to being successful.

Reply Like Like You like this
marmar463 Premium
Congratulations on your success thus far and continue much success I am happy that everything is going great for you that is awesome. Best wishes on your journey with WA,

Reply Like Like You like this
CandP Premium
Wow, you have really got it happening right now! Great work.
We will check out ScamAdviser, never heard of it.
Wishing you great success!
C & P

Reply Like Like You like this
AndyCalvin Premium
@CandP
Thanks C & P. You were the ones that talked about Quora previously, and how you were going to get on it, right? How has that been going?

Reply Like Like You like this
CandP Premium
@AndyCalvin
Yes! We have been writing on Quora. Got warned as well initially for putting in too many links, so stepped back, like you, and just give helpful answers. We are monitoring it.
C & P

Reply Like Like You like this
AndyCalvin Premium
@CandP
Awesome! If you need any help, ideas, or suggestions, feel free to PM with questions. I don't mind helping you in any way possible!