So this is my progress update - Month 5, I believe. I used my website to blog about my month 4 progress update, which is probably why you can't find it on WA.

In any case, I was able to achieve quite a bit within this month, and am happy to report on it!

The Traffic I've Been Getting!

As you can see from the above screenshot, traffic can do some pretty crazy things within a month. For about 4-6 days I was getting over 2K page views a day, and on one day hit over 4K of page views in one day.

Because of this, I was able to apply to MediaVine, and am hoping that I will be accepted (the process just takes a while, or so I've heard).

As of right now, I'm currently averaging around 700-900 entrances to my site a day, which is pretty exciting.

The Users I've Been Receiving!

During the high times on my site, I was able to quickly snapshot just how many users were on my site all at one: 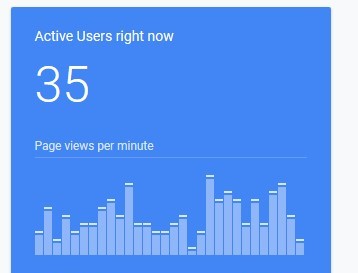 I was pretty surprised when I saw that number on my Enter your own correction.... 35 is a great achievement, even it if doesn't really mean much.

The Comments I've Been Having

Now, I'm too lazy to figure out how to tell how many I received this last month, but over the last several months I've been able to generate over 300 organic comments to my website - and more coming soon (probably, hopefully...)

Yes, not all of them are from other people - according to the screenshot above, it appears 129 of them are me replying to another comment. But even still, 177 comments is still a pretty happy achievement.

(And I just got an email saying that I have another comment...)

The Money I've Been Harvesting

Yes, ladies and Gentlemen, it does mean that I am finally a 3-figure business owner. LOL. And all this was generated through ads, which is sort of good/bad, since I haven't really made anything with affiliate links (more on that below).

It's a nice feeling realizing that your business is making you 3-figures in one month. Oh, it doesn't really pay the bills, nor does it give you much spending cash, but it just shows you what you can do.

Now, all I need to do is scale upwards!

The Referrals I've Been Generating

My WA starter referrals seem to have been going up in the last month:

In the last thirty days, I have been able to get 37 members to WA. None have gone premium yet, but that's okay. That will happen sooner or later.

Also, another affiliate program I'm a part of has also been generating a lot of clicks to it, but no sales yet. Money will come in soon enough. I just need to be patient.

The WA Ranking I've Been Seeing

The WA ranking system isn't really anything that I think much of - it just is what it is. I don't focus too much on it, but, since something did happen, I decided to share about it. 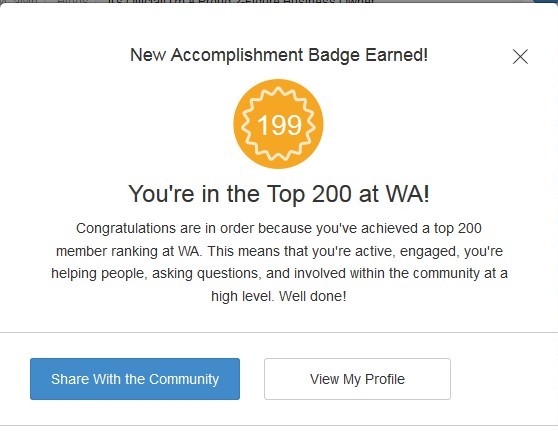 The reason (I believe) this happened was because one of my posts on WA got to the top of the 'Today's Top 10 Posts' a little while ago:

The Success I'm Ready To See!

Well, that's pretty much it for this month. I'm excited to see just where month 6 will take me, and what I can do within that month. We've got a lot of ideas for our site, and I'm ready to implement as many as I can.

Success is just around the corner. It may be a larger corner than what I think it is, but it definitely is there. Can't wait to see what's on the other side!

Reply Like Like You like this
AndyCalvin Premium
@kpercival55
Thanks KyleAnn! I was only able to achieve this through the help of the community and the training!

Your results are really amazing, Andy

Really excited to see your results :)

So this site is in the MMO niche and you
followed the bootcamp course to get this result?

How many total blog posts you have now?
and what is your publishing frequency?

I'm more in the 'getting scammed' niche - and one of the programs I promote that is legit for making money online is WA. So I'm not exactly in the MMO niche per se, but it is a part of what I look into.

No worries - I'll keep sharing my results. I don't plan on going any where just yet :D

Thank you so much :)