Our blog post is the First Time No. 1 of Top 10 Blogs at Wealthy Affiliate

Yep precisely as the title says, our blog post is the First Time No. 1 of Top 10 Blogs at Wealthy Affiliate since we started posting content on the platform back in July 2020. However, we signed up in May 2016. 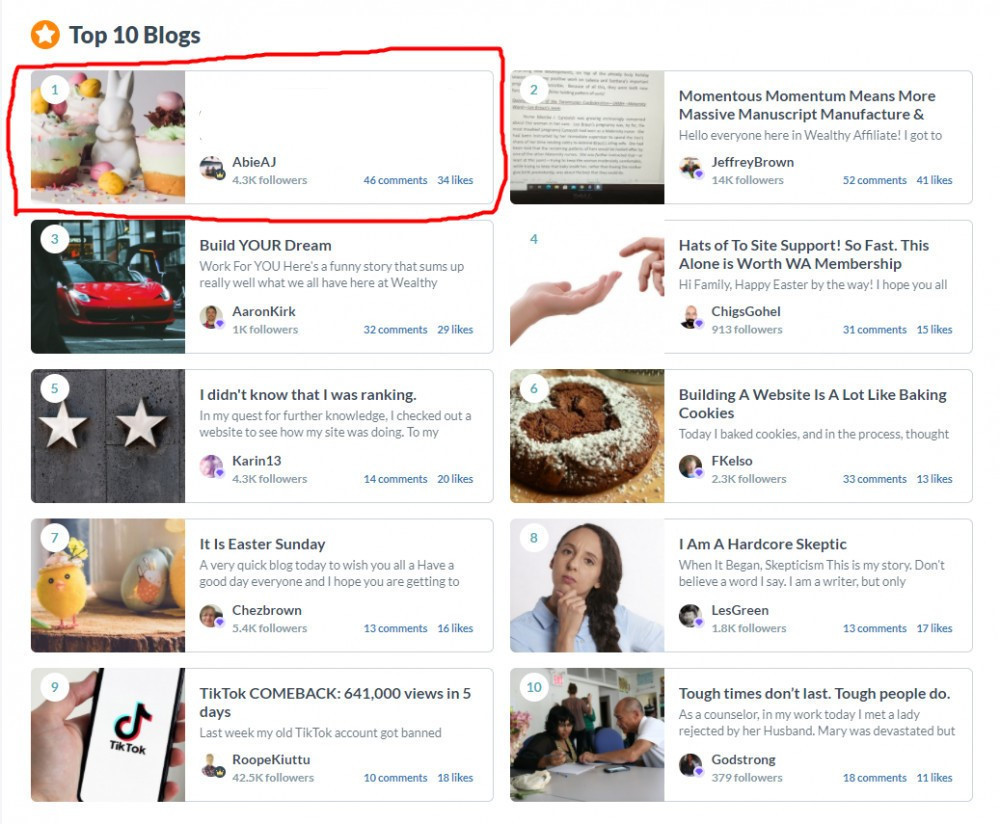 More importantly, our focus should always be on our businesses and sites, ranking posts in Google, Bing, and Yahoo.

You deserve it! Since I arrived here in WA, I saw you very active in helping new members every day. When I went to sleep, you're here still interacting with many newbies and even oldbies. The next day I came back online; I still saw you here. I really do not know when you and how many hours your sleeping.

I hope you well and have a Happy Day!

Thank you and best wishes,

I have learned that the rule is being ignored by the owners because too many people will do a holiday religion post regardless of the rules and we will lose more members but you got posted as top 10 which indirectly violates Rule number #15 but no worries Abie, its not really enforced so I learned no need to worry about that.

But we should like you said at the end of this post that "our focus should always be on our business and sites, ranking post in Google, Bing and Yahoo." I agree but also we should be following the Wealthy Affiliate rules to be on the safe side.

My question is why post that rule if its being ignored. Why is it there, and why are members being confused about it or complain. Thus, I feel that it needs to be re-edited and revamped so we all do not get confused.

See Andre's Post: Learn the Rules of WA first before posting. BrendaMZ
Have a great week!

Have you actually read the blog post titled Easter Sunday of Easter Sundays and Childhood Memories! Have a read and let me know.

Reply Like Like You like this
BrendaMZ Premium
@AbieAJ
Yes I did read it. So did many others. You did state it is compliance, really -because Easter is a form of a religion, it is you can disagree with me all day if you want, but the fact remains it is associated with the easter bunny and the church whatever the church associates Easter with. Although, I see nothing wrong with the post but people do complain that an Easter post associated with religion or a faith post. FYI, which I do not celebrate or birthdays or I do even a faith, holiday, or religion post. I don't do any of those because I do respect the rules of this place. Not only that but I choose to ignore those post and I do not click like on them because I do not celebrate them. I respect other people's right to do so. Even though you stated it is in compliance but many other people celebrate Christmas with a a tree nothing associated with religion. The owners seem not to mind but other people do mind. For me, it doesn't bother me, I just don't celebrate any of it, but do respect you having those memories of Easter even though you did not cite it s a religion, mostly chocolates and bunnies. I am glad you cherish those memories.

BTW, Having that disclaimer was a good point. Monday, blue Monday eh maybe no response due to that and its still considered a Holiday for some people today.

Wish you well, hope you guys have an awesome productive upcoming week.

Reply Like Like You like this
Only1Hugh Premium
@AbieAJ
Hey, thanks buddy I have started using an excel spreadsheet to keep track of helpful links like these. Much appreciated. And hoping that you saw a bumper crowd this Easter weekend.

But I like to help him, when parents are agreeable of our actions, it comes back to us 10 folds.

Do good, be good even sometimes goes unappreciated.